Do you remember the summer of 2019? It seems like everything pre-COVID was at least a decade ago, but less than two years ago, the investment world was up in arms worrying about a yield curve inversion. After Fed Chairman Jerome Powell’s press conference yesterday, the market reacted poorly to the opposite scenario. Wait, you say, inversion is bad but so is the opposite? What gives? Let’s dissect what has been happening and what that means.

To start, the yield curve is simply a visual representation of long-term interest rates minus short-term interest rates (note: the terms "interest rate" and "yield" are used interchangeably throughout). A common indicator is the difference between the yield on a 10-year Treasury Note and 2-year Treasury Note as shown in Exhibit 1 below. As a refresher, as the price of a bond goes lower, its yield becomes higher. As I write this, the yield on a 10-year note is 1.55% and the yield on a 2-year note is 0.22%, which gives us the 1.33% reading you see below. Prevailing interest rates influence everything from mortgage rates to inputs in stock valuation models so they are kind of a big deal. The shape of the yield curve is seen as an indication of economic health because as investors feel better about future economic prospects, they move away from the safety of longer-term government bonds which causes the “price down/yield up” dynamic. Or at least that is one reason to sell a government bond. 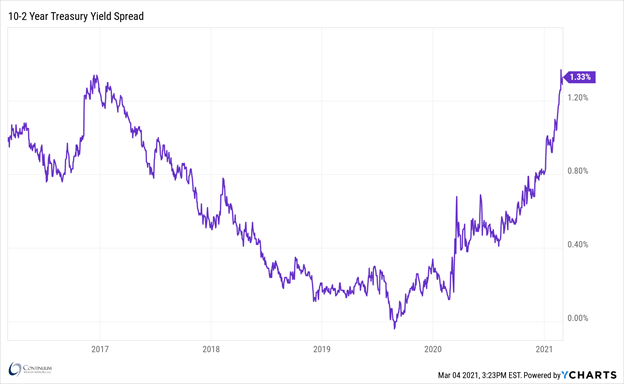 As I mentioned in this article, the threat of inflation can cause investors to sell bonds because a bondholder would potentially be receiving interest and principal in future dollars that might be worth less than previously thought. Speculation is that the fear of inflation is what is driving this recent spike in interest rates and certain investors were hoping that the Fed would help to stem the tide of rising yields. “Not so fast, my friend” said Mr. Powell (I’m paraphrasing). Their mandate is for full employment and stable prices so a situation with unstable prices and full employment a ways away leaves them in a pickle. The proposed solution by some was for the Fed to sell short-term bonds (which raises shorter-term rates) and buy long-term bonds (which would slow down the advance of longer-term rates). Raising short-term rates can put a dent into economic growth so they decided to stay put, stating that they expect any excess inflation to be short-lived. So to recap, rates are rising due to improving economic conditions, rising inflation, or both and the Fed has its hands tied because they are between a rock and a hard place. 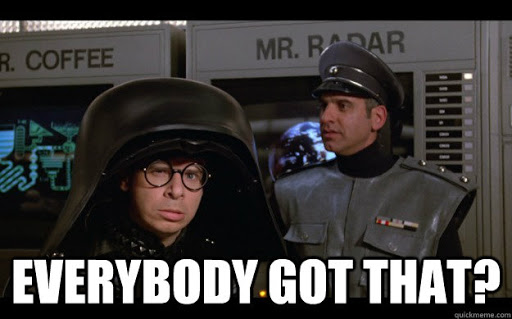 Now that the bond picture is a little clearer, why are stocks selling off too? While the absolute level of interest rates is still historically low, the pace at which they are rising is unsettling to some investors. Since the 10-year yield broke back above 1%, it has risen by 55% in the last two months. To put that in perspective, we had the infamous “Taper Tantrum” in May 2013 when yields went from 1.6% to 2.7% in roughly the same period of time. The S&P 500 pulled back by 6%, similar to the recent drawdown.  They say the market hates uncertainty, but I would argue that it has a greater dislike to adjusting to quickly changing dynamics. We are seeing money being repositioned out of the growth stocks that worked so well during the pandemic and into the stodgy old companies like GE and Exxon Mobil. In an environment with no economic growth, investors are willing to pay up handsomely for potential growth. If everything is growing, we see money flow from expensive stocks to cheaper stocks.

Long-term investors have the luxury of time on their side. These short-term market moves make for great nightly headlines on the news, but it shouldn’t change your course. Back to the Taper Tantrum, stocks appreciated by 20% over the next year after the market adjustment. This is by no means a prediction of the next year, but rather to point out that it’s not necessarily all bad news.

Feedback? Drop us a line!