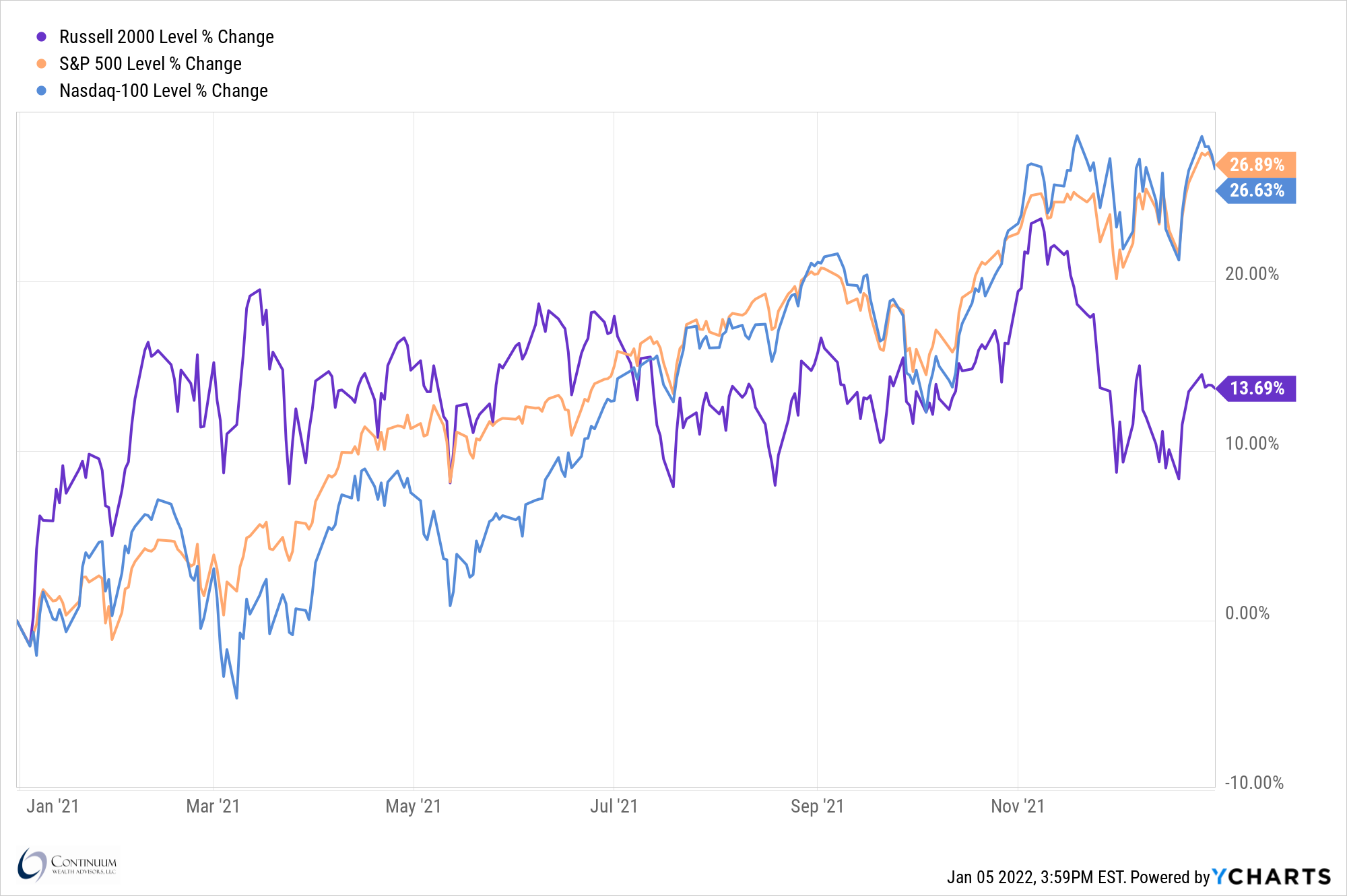 2021 saw a banner year for US stocks. Leading the way (by a nose) was the S&P 500, which returned 26.89%, just edging out the technology-heavy Nasdaq-100, which returned 26.63%. As represented by the Russell 2000 index, smaller companies started strong, rising almost 20% in the first three months, only to take the rest of the year off. What was incredible about this year was the persistence of all-time highs and the absence of volatility. The S&P 500 closed at a record high on 70 of the 252 trading days, second in history only to 1995. Despite numerous COVID headlines and whatever else was the worry du jour, the maximum drawdown seen by the S&P 500 was 5.2%. High returns with low volatility are an investor’s dream, but years like last year are abnormal, and we would expect some more normalcy moving forward. 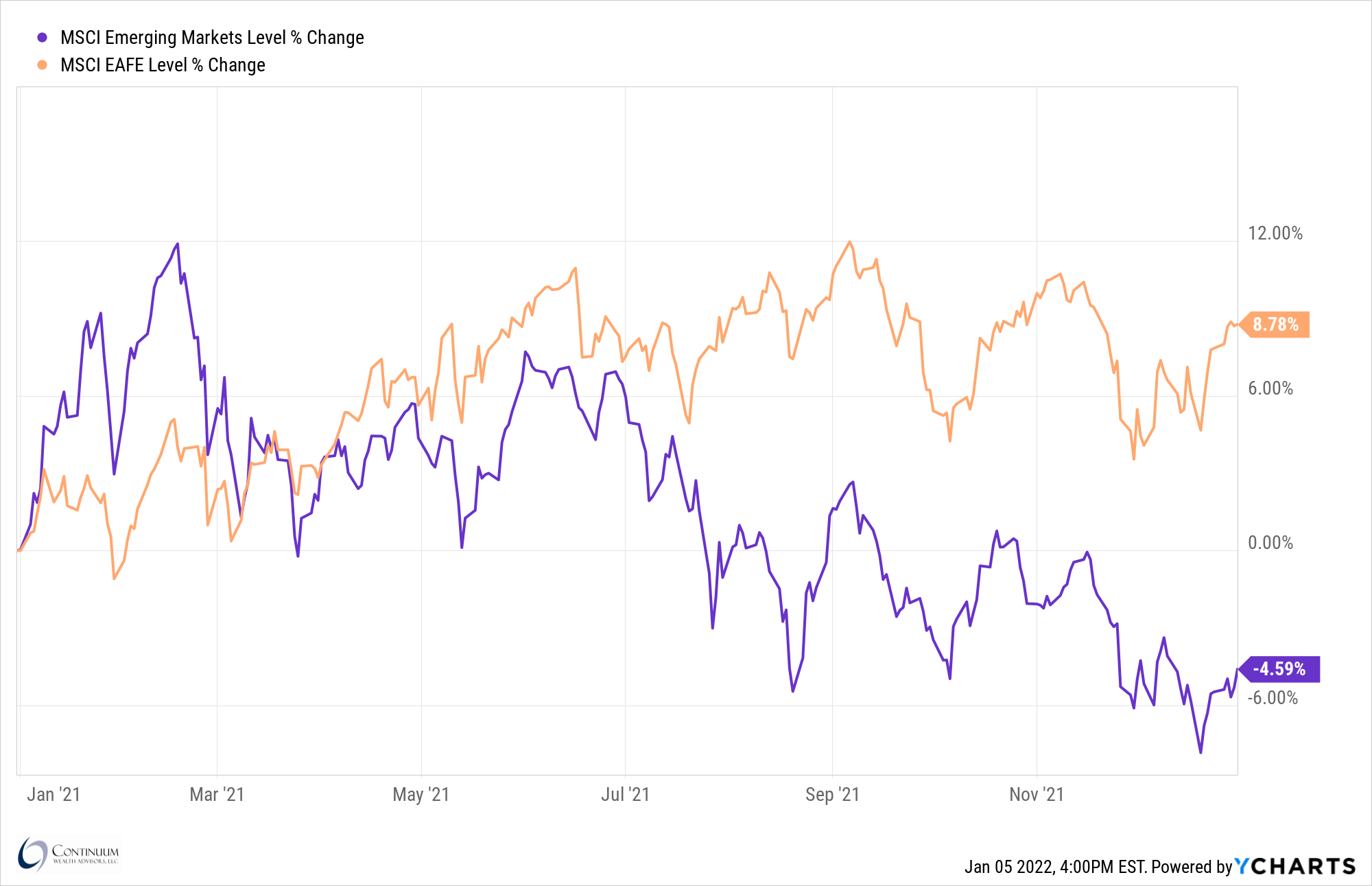 Emerging markets had the roughest go out of major stock indices in 2021. While a return of -4.59% is nothing to fret about, their relative performance to the stock markets of developed economies sticks out. Much of the trouble stemmed from China, as it is the most significant region in that index. One story that got a lot of publicity was the financial trouble of Chinese real estate developer, Evergrande. That story is still playing out, but thus far, its impact has been limited to China. Developed markets, essentially Europe and Japan, had a respectable return of 8.78%. The story remains the same, investors’ preference for technology stocks has kept them buying US stocks instead of their international counterparts. For reference, technology represents just a 10% weight in the developed market index compared to over 26% of the S&P 500. 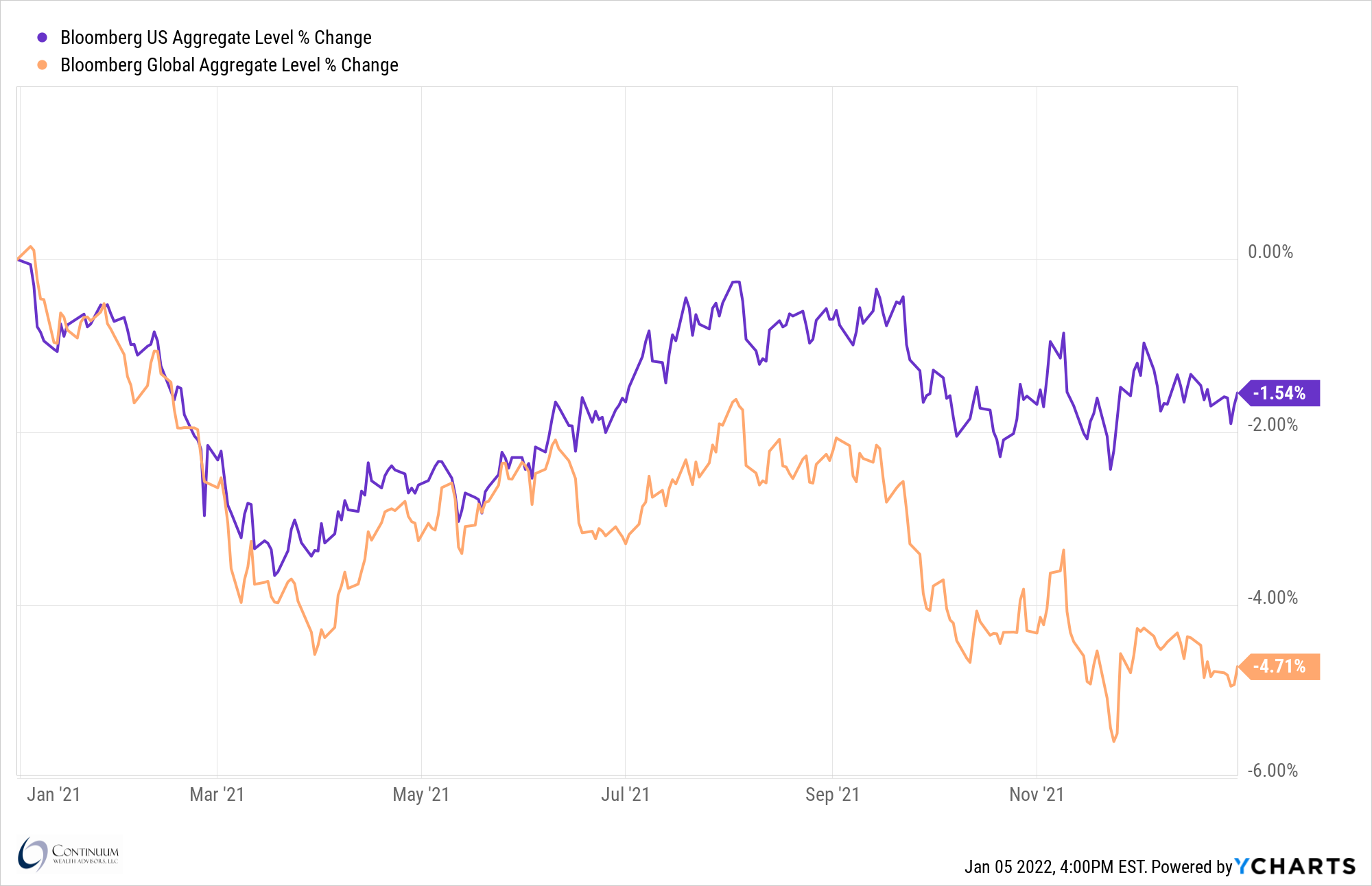 Interest rates were a major story in 2021 as they responded to fears of inflation and potential monetary policy changes. As a reminder, bond prices move inversely to interest rates, so a rise in interest rates across the globe caused a decline in the two major bond markets (as seen above). Looking ahead to 2022, those two themes will likely drive the narrative as well. Higher inflation would likely cause longer-term interest rates to rise, and central bank actions will likely raise short-term interest rates. Part of holding a diversified portfolio is realizing that things will move in different directions. While nobody likes to see a negative return for anything they hold, when the inevitable volatility hits, bonds will work to stabilize the entire portfolio.

Peering into a crystal ball is an interesting challenge for obvious reasons. Nobody knows how the future will play out, and even if we did, gauging the market’s reaction to that future is impossible. For example, anyone who foresaw the devastating economic impact of the still-ongoing pandemic would have surely pulled their money from the stock market and missed the returns over the last two years. That being said, what are some major themes to watch for in the year ahead?

If you have any questions or comments, please don't hesitate to reach out to us using the form below.